Deer Lodge Centre has a long and proud history of caring. Our motto, “Making Lives Better” reflects this history. From 1916 when a military convalescent hospital was established for returning WWI soldiers to today, where Veterans continue being treated with a large population of community patients and residents.

Deer Lodge Centre transferred from a Veterans Affairs Canada hospital to a provincial facility in 1983. Veterans continue to have priority access to personal care beds under the Federal/Provincial agreement. Since changing from an acute general hospital to a facility caring for adult patients with complex needs, it became the largest rehabilitation and long term care facility in Manitoba, with a bed capacity of 418.

John Rowand Jr., son of a wealthy retired Chief Factor of the Hudson’s Bay Company, acquires a tract of land along the Assiniboine river and builds an elegant house – “Silver Heights”.

James McKay marries Margaret Rowand and builds his own elegant home “Deer Lodge” adjacent to that of his brother-in-law.

The Honorable James McKay, Speaker of the House in the first Manitoba Legislature, leases the property to the Manitoba Government as a summer residence for Adams Archibald, the first Lieutenant-Governor.

The property is bought by Donald A. Smith, Lord Strathcona, and becomes a centre for hospitality in the Red River Settlement.

H.A. Chadwick purchases the property and renovates it as an elegant roadhouse known to Winnipegers of the day as “Chad’s Place.”

Fire claims the main building which is rebuilt and re-opened as the “Deer Lodge Hotel.”

Fire again destroys part of the hotel.  It is rebuilt on a grand scale with financial assistance from Roderick MacKenzie, son of Sir William MacKenzie.

The Deer Lodge Military Convalescent Hospital is officially opened by the Duke and Duchess of Connaught and Princess Patricia.

Eighty-five soldiers are housed in the facility.

End of World War I.

The Hospital is purchased and converted to acute-care use by the Department of Soldiers Civil Re-Establishment.

Capacity is reduced to 75 beds.

The Department of Pensions and National Health adds 75 beds.

The facility is expanded by one hundred beds.

Capacity remains at 250 beds until the start of World War II.

A three-storey extension is added to house the Central Registry, Prosthetic Services and the Pension Commission.

A new kitchen and powerhouse are added.

Facility capacity is severely taxed with over 1100 wounded patients.

The “temporary” wooden buildings are demolished to allow construction of a new, eight-storey hospital.

The opening of the new “Lodge” building brings the total beds to 640.

From 1958 to 1983, the focus of the hospital changes as there is less need for acute care veterans’ services.

As the veterans age, the need for geriatric services and programs is identified.

Following prolonged negotiations with the Federal Government, the Deer Lodge Hospital is finally transferred to the Province of Manitoba. $30 million is provided to finance renovations and new construction. As part of the agreement, 155 personal care beds are reserved for veterans.

The total reconstruction and renovation program is completed. The new complex of 406 beds is officially opened by the Lieutenant-Governor of Manitoba, the Honorable George Johnson. The focus of the Centre changes to encourage specialized outreach programming to maintain the elderly in the community and to create an empowering, holistic care environment for those who come for temporary or long term care.

The Minister of Health, the Honorable Don Orchard announces the opening of 90 beds in the Lodge Building and 60 interim Personal Care beds in the South Pavilion.

The 90 beds incorporate an expansion of the Centre’s Respiratory program, a doubling of Assessment and Rehabilitation beds and a new unit for the severely brain injured.

The Deer Lodge Foundation for Geriatrics is formally constituted.

This brings the total bed status to 417.

The Tower Building is renamed the “John Osbourne VC Tower” in honor of the World War II heroes.

The library is Canada’s largest and best known special library on aging.

The library leases equipment to individuals with difficulties talking and/or accessing controls in their environment such as turning on the TV or lights.

Deer Lodge Clinical Oxygen Services was created, allowing us to share our expertise in providing state of the art portable liquid oxygen systems to other WRHA facilities in a cost effective manner. 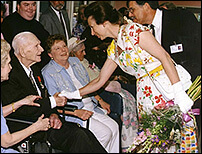 The Life and Learning Centre opens, housing a Learning Resource Centre and a large Worship Centre.

This new 10,000 square foot facility was built in response to a growing demand for education services, spiritual growth and an increasing awareness of our services to the community.

Deer Lodge Centre becomes an Operating Division of the Region.